Live Bee Removal is an option... please do not spray or kill honey bees. 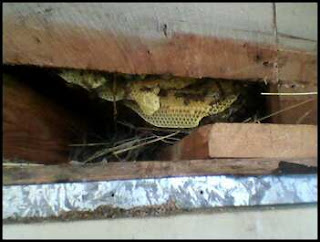 A good example of bees re-establishing themselves after a prior removal.  It is absolutely necessary to close up and seal all areas around a recent removal so the next swarm is not able to move back into the empty space.

A recent swarm that started a new hive in an old Goleta farm house.  It was in a wall space between an old closed off window and an unused storage room. Five layers of new comb that extend all the way up to the header board. 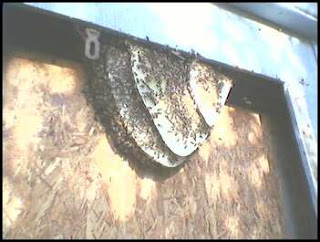 3 Goleta Swarms in One Evening

Swarm Removal Goleta. It is swarm season, but it's always nice when you can get 3 swarms in just a couple of hours and all within 1 mile of my home.  The first by DPHS, the second on the corner of Glen Annie and Cathedral Oaks (small farm corner) and the last all the way up Glen Annie above the reservoir.

To top it all off I picked up one additional swarm the next day in Ellwood Canyon.  I wish it was always this easy!

Bee hive removal Hope Ranch area.  Tip of the day - do not let a hive move into your home and do nothing for three years. At first it might seem pretty cool, just a few bees moving in and out of a wall or roof eave, but before long hives that are left alone can grow to an immense size.

This hive was removed from a rental property. It moved into a roof eave and grew very large. This wasn't an attic space, yet rather just the space between a vaulted ceiling and composite roof. Since there were so many bees in multiple spaces several openings had to be created to access all the comb and bees that had been left unchecked for 2-3 years.  Jobs that include major cutting are done in conjunction with Dan Briner construction.  He does the major cutting and handles the repair separately. 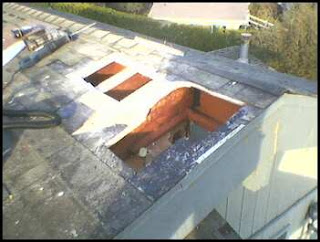 Approximately 20 bee combs filled the entire area of the largest cut-out.  In the photo above, 4-5 layers of honey comb were attached to the ridge beam between the joists, which than led to brood comb and then more honey comb. The second box area was cut on the next work day, which revealed additional comb and a large number of bees.

Search This Blog and Links